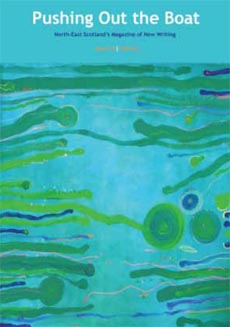 Cover: ‘Swimming in the Coral Sea’ by Tim Winters

‘When you have written your first works the natural thing is to look around to find a place to publish. The same applies to creating your first images — where can these things be shown? If you are lucky there will be a good magazine in your part of the country. For me growing up in Belfast it was The Honest Ulsterman and a little later New Irish Writing in the Irish Press, edited by David Marcus.

In the mid eighties I was Writer-in-Residence at Aberdeen University (more accurately Non-Writer in Residence) and the magazine there at that time was Scratchings. The quality was in the writing and not in the production. But that’s as it should be, there being no money at the time. Scratchings was a good name for it — porous paper and a couple of staples.

But things have changed. Last time I was in Old Aberdeen I was given a complimentary copy of Pushing Out the Boat — a delight to the eye and to the inner ear. For the last 10 years North-East Scotland and its writers, artists and readers have been well served if this edition was anything to go by. Beautifully produced, stylish and with writing in English and Doric (when I eventually got round to reading Sunset Song I was amazed at the power and elegance of Grassic Gibbon’s language). The editors are proud of their track record in giving a worldwide circulation to new poetry and prose which includes work in Doric.

So congratulations on the Tenth Anniversary Issue. Long may it continue.’

Bernard MacLaverty
Bernard MacLaverty was born in Belfast but now lives in Glasgow. He has published five collections of short stories (the latest is Matters of Life & Death) and four novels — Lamb, Cal, Grace Notes (short listed for the Booker Prize), and The Anatomy School. He has written versions of his fiction for other media — radio plays, television plays, screenplays and libretti. He was Writer-in-Residence in the Aberdeen University English Department in the mid 1980s and later, in 2007 to 2008, he did some creative writing teaching at AHRC Centre for Irish and Scottish Studies. He is a member of Aosdana in Ireland.

What Every Islander Knows
Jonathon Wonham

The Iguana, the Scientist
and the Hamburger
Martin Walsh