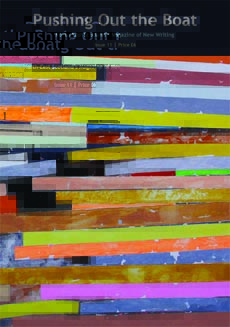 Published by Pushing Out the Boat, 2012

Issue 11 of Pushing Out the Boat, North-East Scotland’s Magazine of New Writing, was launched on Sunday 6 May 2012 at Peacock Visual Arts in Aberdeen, and was showcased at the SMART Gallery’s IMPRINT Weekend on Sunday 27th May 2012.

‘Having run a festival for over ten years, the selection of a balanced and diverse programme of writers is never something I would underestimate. It is almost an art in itself, as vital as the selection of images in a poem or the paring down of narrative in a short story. Get it wrong and the whole will fall with the parts; get it right and the selection will enhance the contents, each resonating with the other.

Enhanced by beautiful artwork, this excellent collection takes the reader through a positive festival of forms – from poems to short stories, prose poems to found poems – through haunting images, intriguing stories and allusive narratives – looking intently at families, relationships and domestic life, at the natural world and the cultivated world.

The journey takes us from an Indian cremation, past neighbours calling the social worker, to the old Botanic Gardens Station in Glasgow. Along the way we encounter Moebius strips, flying bananas, the daily alien, aphid sex, a night ritual and a gentleman spider. We take in unbaked dough, zeppelins, spaces-ships and submarines, even a really strong glue that fixes chairs to walls! We pass peacefully by the River Don, roll place names round our tongues and study maps of the Angus coast. All set for Pushing Out the Boat where we surely get the widest view of great new writing and the visual arts from the North East and beyond. Anchors aweigh!’

His Heart’s in the Right Place
Heather Reid

The stories from Alison and Douglas
may be read in full in issue 11.